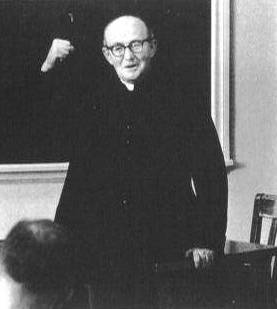 The founding and charter Chaplain of the current AOH Division One in Pittsburgh, he was an advocate for the working class.

Msgr. Charles Owen Rice was born in New York of Irish immigrant parents. In 1937, he was one of the founders of St. Joseph’s House of Hospitality. This same year he joined his first picket line at the H.J. Heinz plant in Pittsburgh.

In 1967, he marched with Rev. Martin Luther King, Jr. in the “Spring Mobilization for Peace” in New York, and he served those blue-collar workers in the Pittsburgh area as steel mills and other manufacturing plants closed in the 1980s.

Msgr. Rice was seen as pastor of souls who profoundly cared about the welfare of his fellow man. He did not limit himself only to the spiritual aspects of his parishioners’ lives, but also their day-to-day struggles as part of his ministry.